Where have all the Great White Sharks gone? 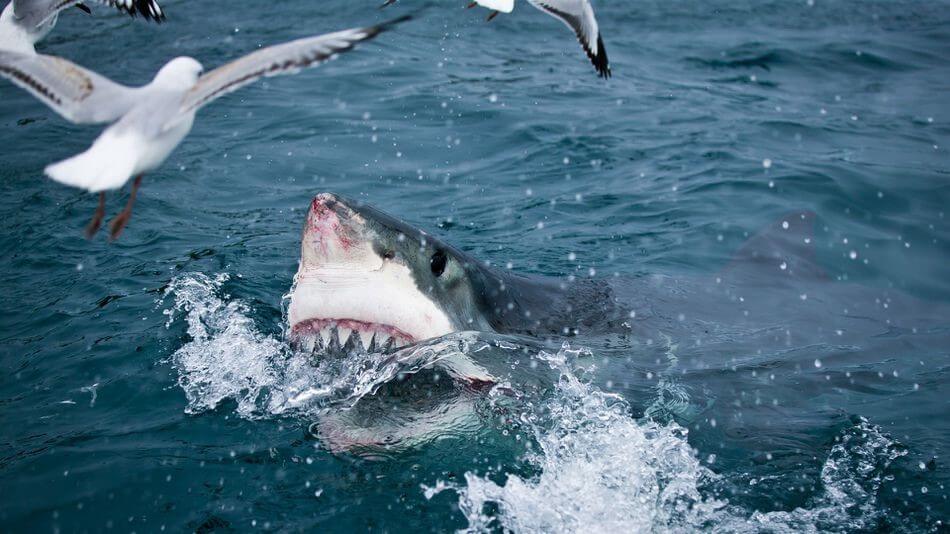 Great White sharks are the stuff of legend and Cape Town’s False Bay gained a worldwide reputation for its very visible population of the magnificent creatures. But now they’ve gone missing.

For the past 18 months, the Cape Town municipality has been monitoring the gradual disappearance of Great White sharks from False Bay. Working in tandem with a conservation group called Shark Spotters, researchers recorded a massive drop-off in the number of Great White sightings between 2016 and 2018.

There has not been a single confirmed sighting this year at a beach where spotters used to see upwards of 200 sharks annually. Where did they all go?

In 2009, Dr. Sara Andreotti of Stellenbosch University began counting Great White sharks around the South African coastline. Her findings came as a surprise: there were between 353 and 522 sharks cruising around the seaboard – less than half the figure she had expected. Using a process called genetic analysis, Andreotti and her team refined that sum, discovering that 333 breeding sharks were all that remained of the once-numerous species. That was a bad sign – shark populations need at least 500 breeders or inbreeding will cause genetic deficiencies, perhaps even keeping the group from reproducing entirely. Those findings crystallized in 2016. Since then, the population has probably shrunk further. This raises another question: why was the population dwindling in the first place?

Because animal behavior is complex and dynamic, it is difficult to point to a single exclusive circumstance that explains everything. However, one thing is clear: humans are, at least partly, responsible.

Human-shark interactions have been complicated from the beginning. Prehistoric predators with up to 300 razor-sharp teeth, Great White sharks instill a deep, primitive fear. Perhaps that is why, in the 1930s, Australian fishermen began setting up gill nets, enormous fishing nets that float vertically in the water. A demonstrably ineffective way of protecting beachgoers, gill nets also have significant detrimental effects on marine animals, catching and killing everything from turtles and whales to Great White sharks. Although much of the world has banned their use, one can still see them along the KwaZulu-Natal coastline.

Because of the indiscriminate nature of shark nets, institutions like the KwaZulu-Natal Sharks Board now prefer drumlines, a more targeted method of reducing the shark population. Drumlines are large hooks attached to bait, which catch and kill curious sharks. There have been zero shark attack fatalities in KwaZulu-Natal since the introduction of drumlines, but that comes at a massive expense. According to statistics released by the Sharks Board, only a quarter of Great Whites caught between 2013 and 2017 were released alive.

The most egregious human attack on sharks, however, comes not from protection agencies but from fishers. One study showed that fisheries tend to collide with Great Whites in certain hotspots, where both ships and sharks head to look for fish. In the ensuing interaction, sharks often get caught on baited hooks and suffer devastating internal injuries.

that “sharks have limited spatial refuge from current fishing effort in marine areas”. In other words, when the with. However, the loss of these massively imbalance the marine ecosystem. in shark cage diving, called the impact on his business “absolutely tremendous”. “Tourists are obviously aware of it,” he said, noting, “It’s the first time in 17 years that sharks aren’t breaching in False Bay.”

Where did the Great Whites go? That is a difficult question, and it will take years to fully answer. We don’t know enough about shark behavior and movement patterns, which can be erratic and difficult to explain. According to a statement released by Dr. Allison Kock, a marine biologist at SANParks, sharks “are capable of large migrations and, when conditions are not good in one place, they can move to a better one”.

Another theory holds that Great Whites might be fleeing larger predators. Two killer whales spotted in False Bay – true to their name – might be targeting sharks for their livers, which make high-fat, scrumptious meals for a hungry orca.

The research indicates that the population is in serious trouble. There are a lot of things we could have done – and could still do.

Scientists are hard at work creating non-lethal shark control methods, including an eco-friendly barrier that mimics kelp forests and doesn’t harm marine life. Fishers have a wide array of options, such as real-time satellite surveillance that explains where sharks are and how to avoid them. Other options include technology that sends irritating electronic or magnetic signals, deterring sharks by making use of their incredible sensory biology instead of killing them. Here’s hoping these initiatives work and the charismatic predators return to False Bay one day.