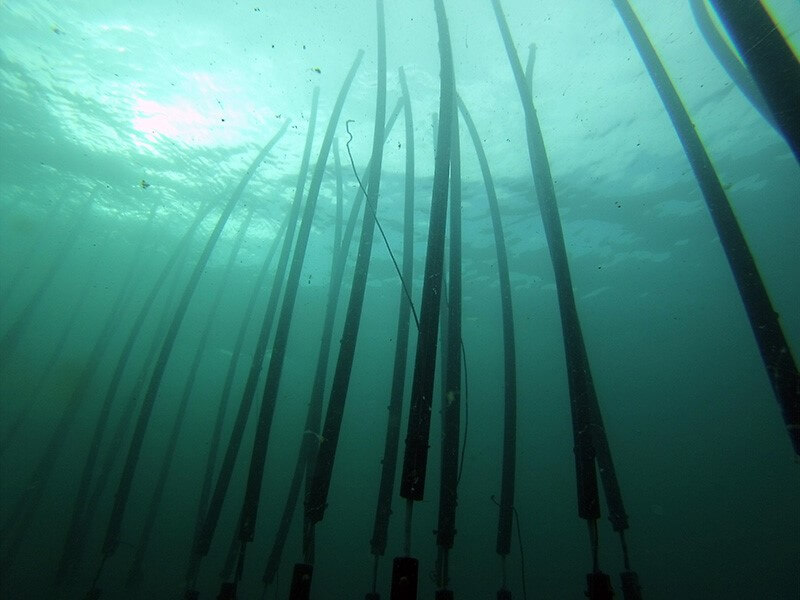 The increasing presence of great white sharks in Massachusetts waters had many people thinking twice before taking a dip this past season, especially after the tragic death of 26-year-old Arthur Medici in Wellfleet. The gray seals that white sharks prey on are not only multiplying, but expanding their territories, with colonies now reported on Nomans Land off Aquinnah, and Gull Island amid the Elizabeth Islands. Between the Cape, which teams with thousands of seals, Nomans Land, and Gull Island, the Vineyard finds itself within a triangle of shark food. How Vineyarders can keep these enormous fish at bay — keep them from straying close to beaches and potentially mistaking the outline of a swimmer for that of a seal — is a question gaining increasing currency. A South African startup may have the answer with an screen system called SharkSafe Barrier.

The barrier is a submarine wall of tubes meant to look like a kelp forest. The researchers who developed the barrier calculate sharks are loath to enter kelp forests.

“Sharks need to constantly swim to oxygenate their gills,” marine biologist Sara Andreotti, SharkSafe Barrier’s general manager, said, “so they are likely to avoid an environment that can trap them, obstruct their gills, or simply constrain their movements, such as a thick kelp forest.”

“Michael Rutzen [South African cage diver] had the idea of building an artificial kelp forest as a shark deterrent, to substitute for shark nets, for several years, following his firsthand experiences in diving with the white sharks in open waters,” Andreotti said. Rutzen’s goal was to stop shark deaths from traditional net barriers and drum lines.
Rutzen and Andreotti later met Craig O’Connell, a former Ph.D. candidate at the University of Massachusetts, Dartmouth, who was developing barium ferrite magnets for use in trawler nets to help avoid shark bycatches. The three then translated the magnet idea to the faux-kelp barrier. Andreotti personally tested the barrier by free-diving into chummed waters.
“After the sharks arrived, I had to jump inside the barrier,” she said. “I would say I have a lot of faith in this system.” The white sharks did not attempt to breach the barrier, she said.
Andreotti said she did not believe a white shark chasing a seal would enter the faux-kelp barrier. “If a shark is chasing a seal, it is unlikely that the shark can still swim through four rows of SharkSafe Barrier,” she said. Four rows is the recommended beach design for human safety, she said. Seals pass through it harmlessly, she added. “We are at the stage where we can install the barrier in areas with rocks or less than one meter of sand.”

The kelp barrier “must be about one meter above the water at high tide,” she said. The plastic composing the barrier can be made from 100 percent recycled material.
The barrier runs about $35 per square meter, “calculated on 20 hectares of surfable water,” she said.

The strands of faux-kelp are manufactured in South Africa, while the concrete anchors are onsite by a local subcontractor.