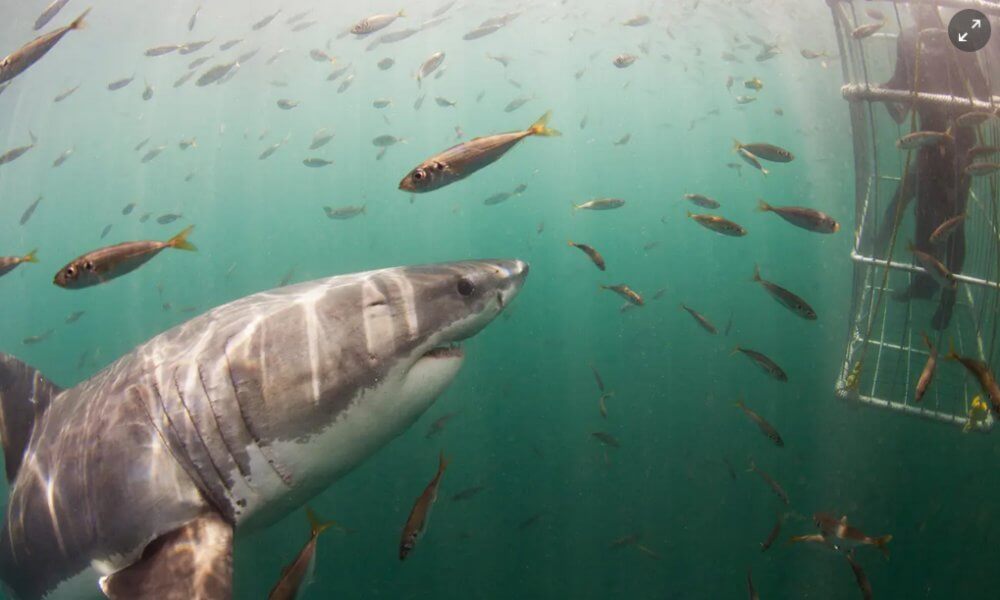 For those who watch the waves, rocks and beaches for the distinctive silhouettes and dorsal fins, there is still hope. If the great white sharks are gone for now, they will return, one day soon.

Not so long ago, there were 200 or more annual sightings in South Africa’s False Bay of the most famous of sharks. The sheer numbers gathering around one island off the stunning curve of sand just east of the Cape of Good Hope and the city of Cape Town made it the “great white capital of the world”.

This year, a single shark has been seen. Last year, not one.

“We need to keep watching to work out what has changed and why, and when they may come back. For now, we are still really hopeful the sharks will return,” says Sarah Waries, of Shark Spotters, an organisation largely funded by local authorities to monitor the population of great whites in False Bay and watch over the beaches.

For Gregg Oelofse, the absence of the great whites could be the most dramatic environmental change he had seen in 20 years as a conservation biologist in the area.

“It would be a massive loss for Cape Town. They are such a big part of the environment, of our sense of place and identity here, it would be a tragedy if they never came back,” says Oelofse, head of coastal management for Cape Town.

The great whites are important for economic as well as environmental reasons. They are part of a £2bn-a-year tourist industry, as much of an attraction as Cape’s vineyards, game reserves, fine dining, or Table Mountain.

The tour companies taking visitors out in boats to view the sharks, or lowering them in cages into the sea for closer encounters, employ hundreds in a country that suffers from an acute lack of jobs.

Though there are still other sharks to view, the absence of the crowd-drawing great white is a challenge to an industry seen by some as a leading example of successful eco-tourism.

Experts began to notice the decline of the great whites about five years ago, and remain divided over the reason for their absence from False Bay. Some have suggested the arrival in 2015 of orcas, another apex predator that attacks sharks, forced even the great whites to retreat.

Two orcas, named Port and Starboard, have been seen repeatedly in False Bay, most recently last month. Carcasses of large great whites have been found with evidence that the orcas killed them for their livers.

Oelofse says that the orcas’ arrival could be a factor but not the only reason for the great whites’ absence. Instead, research suggests the population of great whites has been in freefall for many years.

Dr. Sara Andreotti, a marine biologist at Stellenbosch University who has been studying South Africa’s great whites for more than a decade, estimated in 2012 there were no more than 522 off South Africa’s coastline.

These ranged from possible pollution – such as heavy metals entering the food chain and possibly damaging sharks’ reproductive systems – to the impact of longline fishing boats that have taken huge numbers of fish from the waters east of False Bay in recent years.

Great white sharks have been protected since 1991 in South Africa, but other shark species that provide much of their diet are not.

Andreotti says: “You cannot protect the predator without protecting its food. Sharks are not sardines. They are very slow to reproduce. You can fish but you have to do it in a sustainable way. That will be less profitable in the short term but will not crash the entire environment and the industry.”

Chris Fallows, a respected shark expert and guide based close to Cape Town, is in no doubt that longline fishing was responsible for the disappearance of the great whites.

He says the populations of two species that provide much of the food of the great whites had collapsed.

“If you stopped the demersal shark longlining then there is every chance they will come back, but not in a hurry. The marine ecosystem has been intact for millions of years and in the space of five we have laid it to waste,” he says.

Local officials have shown limited interest in the problem, though the South African department of environment, forestry and fisheries has appointed an expert panel to recommend actions needed “to properly manage and conserve all shark species found along the country’s coasts, and to guide their long-term sustainable use”.

Waries remains optimistic. She remembers how numbers of sightings dropped markedly between 2008 and 2009, before a surge in 2010 when the great whites returned almost overnight.

Oelofse described anecdotal evidence of long periods in the past century when there may have been fewer sharks in False Bay, and says that there had “peaks and troughs” in recent decades.

“It is possible that there are bigger cycles here [over longer timespans] that we just don’t know about yet … The level of our knowledge really isn’t that strong,” he says.

“I’m hopeful the sharks will return but the longer they are gone the lower the chances seem of that happening.”