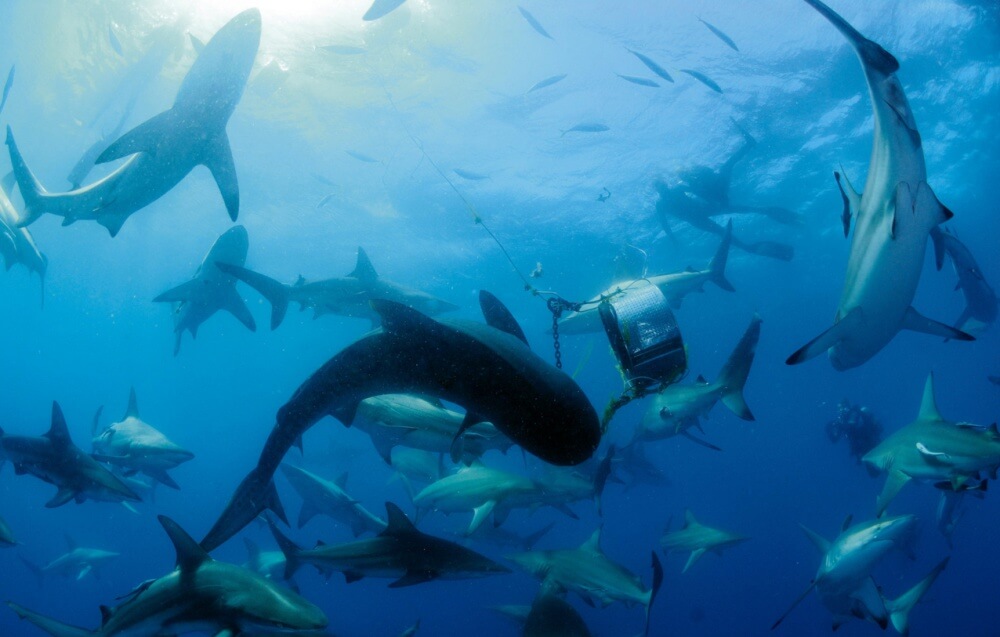 One of the world’s first eco-friendly ways to keep predatory sharks from swimmers and surfers has been developed by a team of South African experts. The SharkSafe Barrier bio-mimics a thick forest of kelp, which fur seals (among others) use to keep themselves safe from sharks.

The co-founder of one of the world’s first eco-friendly devices to keep sharks at bay, Dr Sara Andreotti, a marine biologist in the Department of Botany and Zoology at Stellenbosch University, explained during a webinar that the system works through barriers that consist of magnets in pipes, to which sharks are extremely sensitive.

The pipes are built from recyclable plastic.

“These magnets don’t need a power source — they are like fridge magnets, but on steroids. We have one per metre to create a magnetic field. It is shark-specific. It has no effect on other animals — in fact, it creates an artificial reef that increases the local biomass,” she said.

Other marine animals just swim right through it.

The first tests were done in South Africa and the Bahamas where great white and bull sharks were attracted with bait. None of the 84 great white sharks or 42 bull sharks swam through the barrier. The barrier does not affect marine life such as seals or bony fishes that naturally use kelp forests as effective refuge and foraging areas.

The next step was a test in Reunion, and 200 units were shipped out. Andreotti said it took four divers only nine days to install all the units in a square shape for testing. Since January 2019, it has required no maintenance and the sharks are kept away without being harmed.

“It has solved three problems at once: The human safety concern, the ongoing ecology issue associated with shark nets, and tourism.”

Reunion saw a drop of 40% in tourism after a single shark attack.

“Australia has the same problem; it has a huge impact on the economy. The idea of using a net is to kill as many sharks as possible, but it kills a lot of other creatures as well. However, it would be tragic if sharks die out under our watch.”

A big issue is that an eco-friendly shark tourism industry brings in money, but without sharks this is impossible. So they wanted to interact with sharks and see them at a diving centre as the best way to understand the fascinating creatures, “because we care for what we know”, she said.

“An eco-friendly [drive] creates jobs; there are so many activities around it, including diving. It is also educational because you teach a generation of young people to care about a healthy ocean. If you have a healthy shark population it becomes a mecca for divers,” said Andreotti.

“The challenge we now have is to change the shark-human relationship, which is not an easy task. On the bright side, we have already received several requests from overseas for installation.”

She said the SharkSafe Barrier can be a tool to promote more sustainable coexistence between humans, sharks and the ocean. However, times have been changing, rapidly.

“It is a fight against time.”

She told Maverick Citizen that to have such permanent installations in South Africa, a legal framework would be needed, even though it would save municipalities a lot of money in the long term because the device needs little maintenance.

“It would be ideal to have it in South Africa instead of nets.”

Andreotti said the “government in general, hates to change its ways because they have been doing something in a specific way for so long. Unless there is enough public pressure and change becomes the easier thing to do. The shark nets do not protect surfers, it just kills the animals. “Before a cost estimate can be given, we have to survey the seabed. Each place is vastly different. I don’t want to raise expectations and then the price is different, she said.

The SharkSafe Barrier can resist swells as high as 8m. It can be deployed at different depths — up to 12m — and can be built in any size. It allows boats and divers to pass through undeterred.

In 2012, a genetic study by Andreotti showed only between 300 and 500 great white sharks were left along the South African coastline. All sharks are extremely sensitive to overfishing, climate change, pollution and lack of food resources, as well as being targeted to keep surfers and swimmers safe.

After a highly publicised incident of conflict between sharks and beachgoers in 1936, shark nets were deployed in Australia and in 1950 South Africa adopted them too.

More recently, at Reunion and New Caledonia, sharks are being culled, to reduce their numbers in an effort to protect surfers.

“Thousands of sharks are killed in nets, but also other animals such as whales, dolphins, turtles and others,” Andreotti said.

Walter Bernadis from African Watersport Diving Centre in Umkomaas, near Durban, said the nets are “curtains of death and any animal which puts its head through it, dies”.

Drum lines and baiting are also used to attract sharks, he said.

“We have to change the attitude of people towards sharks [to be more like] the way we feel about whales, dolphins and turtles. If you kill a shark, there is not a beep on the radar.”

Bernardis has removed hundreds of hooks from the mouths of sharks, during dives.

Mike Nortje from Pisces Divers in Simon’s Town said Cape Town is a biodiversity hotspot and the kelp forests are part of that. Diving with animals is very popular and people dive and snorkel with Cape fur seals, and they often see gill sharks. Around 2015, this species began to decline because the food sources of the great white sharks started to collapse. Gill sharks are smaller sharks which are caught along the coast.

“For the balance [between great and small] to recover will require serious management and intervention,” said Nortje.

“We are on a blue planet; people should start caring, even those who don’t care, should,” Andreotti said.

Read the original article from the Daily Maveric